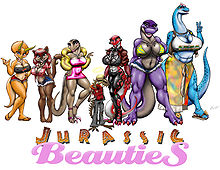 And There Will Never Be An Animation Of It 😭

Val is, according to her official biography, "savvy, smart, sophisticated, and just a little snobby". She has a Master's Degree in accounting and is considerably rich, loving all the diamonds, pink champagne and her pink sports car which she is able to afford due to her financial power. She hates speeding laws and being wrong in any matter.

Val works as an exotic dancer, loving the attention she gets through her job to feed the exhibitionistic side of her character.

Kitti is a sassy feline, currently in her second year of dental school. She has a weakness for tall, dark strangers and likes summer sunsets, sweet iced tea, peach pie, and mechanical bulls.

Kitti also suffers from narcolepsy, spending much time of the day napping.

Brenda is a new-age hippie girl, usually found being in a mellow and optimistic mood. She is an active member in over a dozen positive groups and a believer in free love. She also is a vegetarian, fan of yoga and meditation.

Brenda works as a model for plus-size lingerie.

Tyra is a fun-loving girl, officially considered to be the most playful of the Jurassic Beauties. She likes beef, large males, large sex toys, shopping, and flashing random people while disliking small guys, missing out on clothing sales, dead batteries, passive bed partners and non-imaginative people.

Tyra works alongside Val as an exotic dancer in a local strip club. She is the goofball to Val's more straight-laced demeanor.

Staci is a quite new addition to the Jurassic Beauties' household, described as a "smooth, sexy, and street-smart, highly-educated urban poetess. She likes open-mic poetry sessions, Greek food, intelligent people, incense, and inner beauty while disliking "posers" and "players".

Tyni is a hermaphroditic heavyweight still living in the 80's. She is outgoing, athletic and a sucker for sports, particularly basketball. She is normally easygoing and laid-back but can also be a bit of a slut.

Tyni works as an aerobics and dancing exercise instructor.