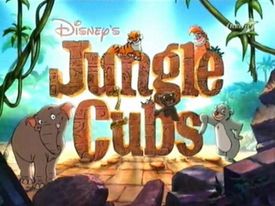 Jungle Cubs was an animated series produced by The Walt Disney Company for ABC in 1996. It was based on their 1967 feature film The Jungle Book, but set in the youth of the animal characters. The show ran two seasons in syndication before moving its re-runs to the Disney Channel, then on Toon Disney before 2001. The show airs in the United Kingdom on Disney Cinemagic.

The stars of Disney’s The Jungle Book were regressed to cubs for this syndicated animated series. Jungle Cubs suggested that when they were younger, both the good and evil animals lived together in relative peace. A remix of the Oscar-nominated tune “The Bare Necessities,” which served as Jungle Cubs’ theme song.

Each of the characters were given distinct characteristics which reflected their future personalities as seen in The Jungle Book; this creative idea further tied the show in with its film predecessor. Uptight panther Bagheera, free spirit bear Baloo, headstrong tiger Shere Khan, wild orangutan Prince Louie, neurotic elephant Hathi, and hypnotic snake Kaa all returned from the film, putting aside their differences to live and learn together. Noting the lack of representation from the female of the species, the show gave an elephant named Winifred a prominent role, who was (Colonel) Hathi's wife in the Jungle Book.

The cubs braved a variety of jungle dangers, often matching wits with sneaky vultures Cecil and Arthur. Living up to new federal regulations for educational television, Jungle Cubs offered lessons on friendship, self-respect, and other healthy traits, delivered in a way young children could easily understand.

In the second season of the show, many of the cubs become slightly older and more distanced from one another. (Many are also given different voice actors.) And, although they still remain good friends, they are getting more and more busy with their own lives and spending less time at their fort, the Cub House (Louie's future palace). Louie becomes wrapped up in being King of the Jungle and is no longer so close to Baloo, Bagheera becomes more serious and uptight than before, and Hathi begins spending more time with Winifred than with the other Cubs. The biggest change, however, is Shere Khan. He spends a lot of time hunting, as Bagheera and Kaa do (this is likely to be a reference to normal animals. When they grow into adolescents and leave their parents, they must devote more time to hunting and concentrating on defending their living quarters), and, as the series progresses, begins to become more annoyed with the other Cubs than before. He even attempts to overthrow King Louie at one point, using Kaa (who didn't really get a choice in the matter) as a henchman. Kaa, as well as Baloo (with the exception of his friendship with Louie), doesn't really change much. He still remains sneaky and uses his hypnotism power.

One Region 2 DVD is available. It is titled Born to be Wild, and features three episodes: