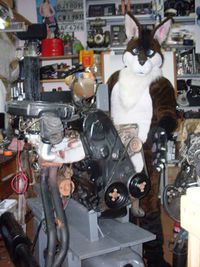 JrFur is a Brazilian fursuiter whose fursona is a maned wolf.[1] He was born on April 27,[1] 1986, in the city of Jaú, São Paulo, Brazil, and lives in Dois Córregos.

JrFur discovered the furry fandom through some furry gallery sites in 2000. His first public appearance was at Abando in February 2015.

In 2013, JrFur commissioned his fursuit from fursuit-maker Kouta Oni, of Fursuit Brazil Creators. The premiere of his fursuit happened at Abando 2015.

JrFur is trained in engineering, and loves cars. He works as workshop leader at a Volkswagen dealership.

Whenever he can, he rides his Jeep, sometimes in his fursuit.