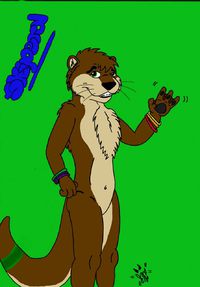 Jox is a wolf furry who lives in Wilmington, Delaware. His fursona is a neon green and white wolf. He also has an otter character named Skiperd. Jox is a member of The Furst State, Delaware's regional furry forum.

He owns two fursuits: one of his fursona, Jox, which was created by himself and Spiritwolven, and one of Skiperd which he built himself.

Jox also builds fursuits and fursuit pieces commissioners. He has made one full suit and several heads and tails. His current project is an improved head for his Jox fursuit.