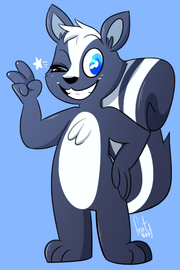 Jovial is a male furry artist from British Columbia, Canada.

Jovial joined the furry fandom in early 2011. Jovial derives from the English word "jovial", meaning cheerful, happy, and friendly. Being mononymous, Jovial has no mentioned last name, though is sometimes unofficially referred to as "Jovial Skunk", or "Jovial Mephit."

Jovial is a digital artist on Fur Affinity, drawing various content ranging from furry to Pokémon. He is known for his simple, cartoon-like art style, and occasionally draws adult content as well.

Jovial's fursona is a striped skunk, who is normally anthropomorphic in appearance, sometimes wearing oversized clothing.

Despite being a skunk, Jovial almost never bears the foul smell expected from a skunk, tending to keep it to himself, though he is still capable. He is highly introverted, often keeping to a small pool of familiar friends, and shy around strangers. While he tends to be a skunk of few words, he can be very affectionate and friendly if he feels comfortable around others, and highly values friendship. Some tend to look at him as more of a "striped cat" than a skunk.

His appearance is that of a short 4 feet, 6 inches (1.37 meter) anthropomorphic skunk, being slightly chubby at 92.5 pounds (42 kilograms) covered with mostly black fur, with a white underbelly. Two similarly white stripes run down his back to the tip of his tail, his hair also white, with two deep blue eyes and white facial markings. His tail is rather large, pointing upwards with his back, unlike other species whose tails tend to hang downwards with their legs.

Jovial is somewhat of a learning artist and plays some games too, preferring Personal computer and Nintendo titles such as Team Fortress 2, Skyrim, Mario Kart 8, Minecraft, Second Life, and Super Smash Brothers 4, among others. As mentioned, he enjoys roleplay, content ranging from innocent affection to more adult content. Other miscellaneous past times are film, music, and speedrunning.