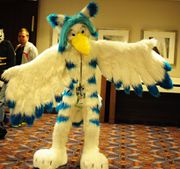 JousterL is a graduate of the J. B. Speed School of Engineering at the University of Louisville, with a Masters in Computer Engineering and Computer Science.

JousterL became involved in the furry fandom through reading several internet comics, the most prominent being the webcomic DMFA. Once he became part of the community, he began to want to go to the conventions, and the rest fell into place. JousterL is the head administrator for the KyFurs group.

Altre Yporia is the whooping crane that JousterL identifies with. The primary distinguishing feature is the large ears, which while not really 'correct' for an avian help define his uniqueness. Across both sides there exist patterned blue markings, and he generally wears casual clothing. Other features include an elongated beak (as per the species) and glasses.

Jouster's suit was created by FauxPaw, and debuted at Midwest FurFest 2011.