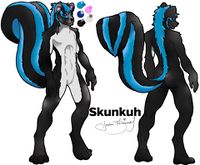 In real life, Joshua is a classical and proto-semitic linguist, educated at Northern Arizona University. He graduated in 2008 with degrees in Vocal Music Performance/Education, and Proto-Semitic Linguistics. He is self-employed as a contract linguist, and spends most of his time working from home on translations projects for a number of universities, museums and religious institutions.

Joshua has been the PR Chair for Furbraskon since its inception in 2013. He is the primary point of contact for all media inquiries and handles public dissemination of information regarding the convention. He was elected into his position by the planning committee and plays a prominent role in advertising and public relations.

Joshua is responsible for the majority, if not all, of the content released on behalf of Furbraskon, and Furbraska, through all official channels, including their Facebook, Twitter, Fur Affinity, Google+, Tumblr and WikiFur accounts.

His fursona is a blue-striped skunk named Skunkuh Slytherclaw. Joshua was introduced to the furry fandom by his significant other, a white liger named Razzer. He is a regular attendee of midwest conventions in a variety of fandoms.