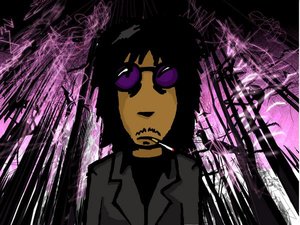 He worked as co-creator for more than five years on a flop animated series called "Lifes Been Good," but things fell through and the series could not be completed due to unforeseen circumstances. The only known pages of Lifes Been Good reside with him, as well as all the scripts. He chooses to not make them public due to an agreement with other creator.

Was the goth/techno DJ know as Graveyard Johnny for KMSA 91.3 [1] Best known for giving air time to bands from Finland such as HIM[2], The 69 Eyes[3], The Rasmus[4], Children Of Bodom[5], etc., but had to quit on account of more important matters.

Shot photographs for a Suicide Girl.

He currently networks through his deviantart and furaffinity accounts, usually drawing whatever he pleases, or a request every now and then.