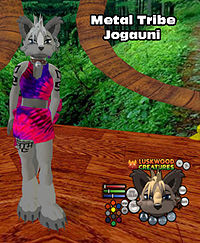 This article is about the species. For the webcomic, see Jogauni (webcomic).

The Jogauni are a race of tribal elemental canines created by Luskwood Creatures.

The elements they are bound to are not necessarily the usual representation of Western elementals (such as fire, water, earth and sky) but are loosely based on Nepali legends.

As they exist in Second Life, there is also a "quest" attached to the avatars. While moderately difficult to begin (unless you ask around), it does reward the player upon completion, in the form of a weapon unique to the player's tribe.

Upon receiving a Jogauni avatar, a player is given a notecard with the legend of the Jogauni tribe it is associated with and the ability to "chant", a short gesture accompanied by a sparkly cloud of particles.

When a player starts the quest, a special HUD (Heads Up Display) allows the player to complete puzzles located throughout Luskwood, a notecard is also given with a completed legend of each Jogauni tribe to help you through the quest. These puzzles - and the hunt to find them through cryptic clues - are what make up the quest. Upon reaching the midway point through the quest, a player will receive a staff as proof of his or her accomplishment. Upon completing the quest, the player will receive his or her tribe's weapon. It does not do damage, but has rather breathtaking particle effects and excellent battle stances.

Many a person who frequents Luskwood will attempt to collect all 8 Jogauni avatars and all 8 tribal weapons, a feat which may take a long time to accomplish, but is an impressive collection.[citation needed]