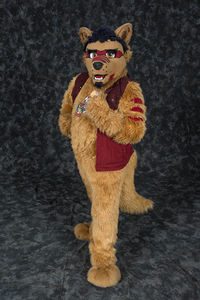 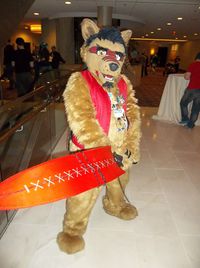 JoeCWolf, also known as JoeWolf, Joe, and Fire Starter Wolf (born April 28, 1989, in Austin, Texas, USA) is an anthro artist and fursuiter[1] living in his hometown with his mate Hodari Lion. His fursona is a Mexican wolf.[1]

Joe became part of the furry fandom in 2004 and is, as of 2015, working on a furry comic called Wild Starter.

Joe's first fursuit was built by Magnus Diridian in 2008.[citation needed] In 2012, a second suit was built by ByCats4Cats and debuted at Midwest FurFest of that year.[1] At conventions while in the suit, Joe frequently carries fake weapons as props; some of them are based off his comic.