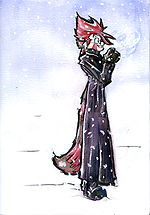 Jirris, aka Jirris Midvale or The Red Alchemist. His player was born 1983, and lives in Portland, Oregon, United States.

Jirris is a magical mad scientist focusing on alchemic body modification, but knows enough sorcery and magical artifice to round out his abilities. Despite this, he's inept in most cases. He keeps several spare bodies hidden in his lab and living area around as a result, having died several times before. He lives in a large Victorian greenhouse that has been converted for use as a laboratory and living space.