Jewel Vixens is a online furry webcomic co-written by Aelius and Steven Swanson, the comic's main artist. It follows the adventures of eight anthropomorphic vixens living in the 1970s as models while working as undercover agents for a mysterious benevolent organization called "F.U.T.U.R.E."

Jewel Vixens parodies 1960s and 1970s spy media such as Danger: Diabolik, James Bond, Charlie's Angels, and Mission: Impossible. It also references local pop culture of the era and employs many popular stereotypes of the era in a comedic fashion while at the same time lampooning the popularity of vixens within the furry fandom and vixen jokes.

The Jewel Vixens fight villains such as the Evil Blue Dude, who lives with his mom and runs the malevolent organization "S.P.E.C.T.R.U.M.", and his lieutenants, of which Evil Pink, Purple Lotus, Citronella Vindaloo, Mean Green, and Furious Fuchsia are known. Each lieutenant represents a colorized division of S.P.E.C.T.R.U.M. with particular practices and evil machinations.

Jewel Vixens is primarily a comedic comic, but at times has serious content. It maxes out at a PG-14 rating for its use of firearms, innuendo, and comic mischief.

The Jewel Vixens are : 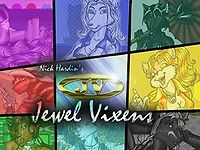 Recently, Aelius came up with a new feature to be added to the website called Ask-A-Vixen. Readers can email an address listed (such as the one in the External Links section of this WikiFur page) with a question to the Vixens, and the answers from the Vixens themselves will be posted on a special section of the website. Aelius warns that this feature is mainly for fun and giggles, so the girls won't be answering anything that spoils potential plots or that just reeks of extreme-fanboyishness. Of course, that very fact DOES give them the chance to mock the people who asked the offensive questions, though.

The comic is currently on hiatus as the main artist, Jodimest, has stepped down to pursue personal projects. Luckily, a number of replacement artists are currently being interviewed and Aelius hopes for the Vixens to make a return soon. He says the writing will remain the same, as he will still be the series' main writer, "but the girls will be wearing new makeup."

As of December 1, 2011 the domain name jewelvixens.com expired and seems to have been cybersquatted.