Jeffy (born November 28th 1990) is an artist and musician who lives in Austin Texas, United States. His fursona, a baby-blue fox, is normally depicted as a fun-loving, free-spirited, mildly obese, toddler fox, normally sporting a diaper and/or underoos, designer vintage labels and/or old-school gaming logos. This hyper little fox is often prone to sudden (and usually massive) weight gain and inflation for no apparent reason. He has a natural aversion to females, in fear of their "cooties", and most often can be found off in a corner somewhere with his eyes glued to his Nintendo Gameboy.

The things he enjoys the most are going on adventures, chocolate, Sonic the Hedgehog, eating, holding hands with boys, hugs, kisses, Monster(c) energy, and playing his old school gameboy. The things he dislikes the most are long road trips, being ignored, anything to do with the female race, popping, and tummyaches.

He gave himself the name Jeffy (a spin-off of his birth-name, Geoffrey), in middle school as a nickname, and it stuck to him during the early phases when submerging himself into the fandom in the summer of 2003. Though, he claims to have been a "furry" all of his life, secretly enjoying being diapered and pretending to be a little kid (toddlerism), inflation, weight gain, and relating to foxes all through his childhood and adolescence.

His favorite color is baby-blue. The same shade as his fur color. 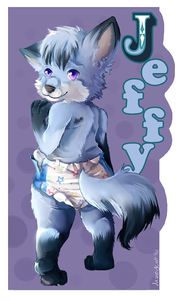 During his senior year of high-school, he came out to his family and friends as gay after hiding it from everybody for many, many years.

Jeffy currently maintains a Tumblr blog and a Fur Affinity account on which he posts his babyfur, inflation, fat, and chubby artwork. 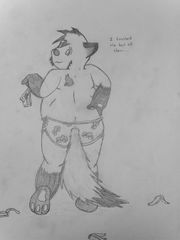 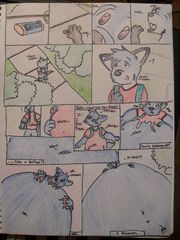 Jeffy has attended Furry Fiesta for the past two years, but hasn't been able to make it to many other conventions due to work and money related issues.

Jeffy is currently father to quite a few experimental electronics projects. His main focus, Fox Island is his 8-bit/grindcore project, and the other by the name of Body Inflation Sequence, which is his harsh-noise project. As well as a project known as project called Supermegafawks in which he implements circuit-bent toys. All projects are characterized by their performances in which Jeffy acts intoxicated and sporadic, normally tends to cross-dress or get completely naked on stage, curses at his audience, hurls fake death-threats, destroys his equipment, and/or harms himself physically.