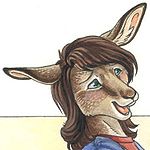 Jeeves, as drawn by Kacey Miyagami

Jeeves (also known as Jeeves The Roo, Jeeves 'Roo, and the Bouncy Pouncy Roo) is, unsurprisingly, a kangaroo. His character has few distinctive markings beyond mid length brown headfur, though in the past he was known to roleplay including a comedic marsupial 'pouch' in his male character's stomach. This pouch served as both a Mary Poppins 'bag of holding', and could be used for carrying other furs around. Jeeves has publically stated that he and his fursona are rather similar in their personality, both with an optimistic outlook on life, but that he is somewhat more reserved than his bouncy furry alter ego. He currently resides in the UK and attends University as an undergraduate student studying for a degree in Zoology.

From 2008 onwards Jeeves began to take written story commissions of varying content and complexity, primarily through his Furaffinity page and the Furbuy auction site.

In 2010 Jeeves released a digitally downloadable HTML formatted collection of over 100 of his short stories, including some stories available nowhere else. It received relatively positive feedback from his fans despite some small coding errors within the collection (it was coded by Jeeves himself) with roughly £500 worth of material being sold over the course of a month.

The fandom and Personal life[edit]

From 2004-2009 Jeeves served as a moderator and reviewer on Yiffstar, now SoFurry. He remains active to the present day on Furaffinity as a user, and enjoys participating in other aspects of furry media such as podcasting, being a regular listener to both 2 Sense and Knotcast.

Since joining the fandom in 2003 Jeeves has been 'mated' twice, but decided that he would rather seek to cultivate friendships online and leave romantic pursuits for the 'real world'. He is currently single, and while he does allow his fursona to appear in romantic or sexual situations within his stories he maintains that he is not actively seeking a long term partner at this time, prefering instead to enjoy himself and let love come to him, if indeed it chooses to.

As a fur, Jeeves believes that being a part of the furry fandom should be fun and enjoyable above all else! While he does enjoy his place within the fandom, he has declared on several occasions that many furs take the fandom far too seriously. While he and his fursona are very similar in personality, leading some of those who know him within the fandom to ask if he's open about his furriness in public, Jeeves does keep his life within and beyond the fandom separate.