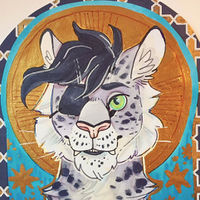 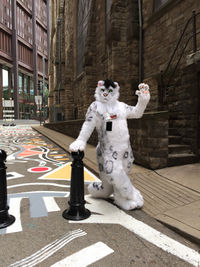 Jayef (also known as Jayef Irbis or Irves) is a musician and fursuiter from the western New York area in the United States.

Jayef is usually depicted as an anthropomorphic snow leopard with an eyepatch covering his right eye, or with a glowing, pupil-less right eye. He has been seen in various art as a pilot, engineer, or musician.

Jayef is active in both the Rochester, NY, and Buffalo, NY, communities, and has hosted numerous panels at both Rochester's FurryCon as well as at Fur the 'More 2014. He co-founded the 'Why I Hate the Fandom' panel, which has enjoyed success at both conventions.

Jayef also provided musical performances as Convair for 2012's Furry End of the World Convention,[1] and as Superlegit for Rochester's FurryCon in 2014 and 2015.[2] He admins the Buffalo Furs forums and related Telegram groups.[3]

Jayef fursuits at conventions and local meets regularly. His fursuit was created by Needle and Claw Studios.

Jayef is employed in a technical field. He volunteers at a Rochester-area cat shelter and works independently performing animal rescue and fursuiting for charity events. He records music under the name Superlegit, and occasionally performs live at local venues.[4]