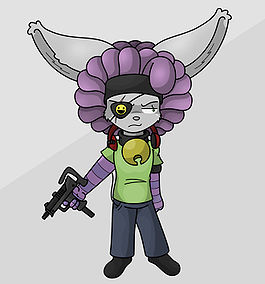 Jaxon Diablos was a former furry Turkish writer and artist who specialized in dark comedic comics such as Citation Needed webcomic. His fursona was a grey furred European Dwarf Rabbit with what is described as a giant purple dreadlock afro.

Despite his comics dark and sometimes insulting humor he is strongly dedicated to being a clean artist. None of his images or comics contain nudity and any which fringe upon certain fetishes are done so for ironic intent.

JaxiD or Jaxi Dee is the online alias in which Jaxon Diablos uses to describe himself as a person rather than as a furry. The phrase "He's Wearing a Hat" is used to sign his work and as a watermark. As an unfunny in-joke he is never shown wearing a hat in any of his images or comics.

In 2009 JaxiD announced that he was taking a 2-year hiatus from artistic projects to work on a video web series. At the same time he announced his leaving the furry fandom by refusing to acknowledge himself by his former fursona, but will continue to draw cartoon animals nether the less.

Since 2011 JaxiD has returned to artistic projects and has begun work on a DMFA fancomic, the script of which being a rough rewrite an earlier unfinished webcomic.