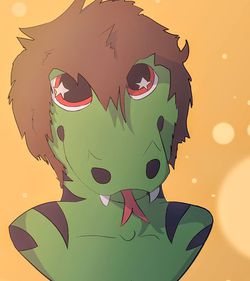 Jax is a furry fan, who has a member of the furry fandom since December of 2017. His fursona is a komodo dragon.

Jax found his origins in the social phone app Amino where he built a reputation among other fellow furries in the Club Furry Amino, although ironically he's technically not a furry, but instead a sub category of the fandom known as scalies.

Jax's origins are undisclosed, however, it is known that he is accustomed to his natural Jungle habitat, resembling that of the ones found in Indonesia. Personality

Unlike many would expect from such a fierce and deadly animal as the Komodo Dragon, Jax is a very tame and sociable reptile. Taking his time to get to know strangers, making new friends, and helping others as he can. He is rarely known to break his temper, but once it is, it's something to be feared as he still does possess the natural Anticoagulant found in Komodo saliva, and will lash out if pressed too far emotionally, although this is rarely an observed occurrence. Traits

A bright green beady and leathery hide, which marked exuberantly with extravagant full body tattoos and are often casually visible up his neck and down his legs and arms. He also has a genetic mutation that causes him to grow a plume of dark fur at the base of his tail, something its rumored he was made fun of and shunned for in his earlier years. Jax also has red shaded cornea that has a faint glow to it. Forked tongue, typical of a reptile that he uses for sensory, and often flits about when coming in contact with somebody new. Sharp, dagger-like claws on his hands and feet, as well as a full maw of serrated teeth.The jaw is flexible, allowing for his saliva to mix with the anticoagulant, causing fatal blood thinning in anyone he inflicts a blood-drawing bite to.