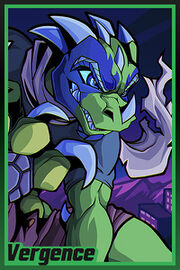 Jasonafex, also known as Vergence (born July 3, 1991), is a furry artist, animator, writer and podcaster from Western Australia. He is married to furry artist Kabier (Genesis), living together in Ontario, Canada. He has remained active in the furry community as a regular content creator for over 8 years.

Jasonafex's fursona, Vergence, is a cross between a lizard and a raptor. The character has become a brand mascot over the years, appearing in several animations, comics, games and apparel. A full timeline and backstory for Vergence was created in 2020 for Jasonafex.com. [1] The character has become a fan favorite over the years, garnering a large quantity of fanart in comparison to their other characters.

Jason began his furry career in 2012, growing in popularity on FurAffinity for his Flash animations, collaborating with many popular furry artists to create the illusion of movement and depth with their static artwork. Many of his animations feature artwork created by his wife Kabier who became a frequent collaboration partner over time. He would slowly transition away from animation and into other forms of media over the next few years.

In 2014 he announced he was working on a furry adult dating game titled Amorous, releasing a demo of the game in November of that year.[citation needed] The full game was published for free on Steam on April 13, 2018.[2]

In 2015, Jason began work on a furry adult Beat 'em up named Bare Backstreets,[3] publishing a demo before discontinuing development to focus on Amorous. Jason would announce BBS would be returning to full development in 2019 via a trailer made on his Youtube channel [4] with a new frame by frame animation art style. [5]

Also in 2015, Jason experimented with interactive flash games in collaboration with Kabier and Skydeertoons.[6] He would then partner with Fek to create Bedplay[7] which became one of the most popular adult games on the Newgrounds platform.

In 2018, Jason would post his last game made in flash Toy Tester[8] before moving onto making games in Unity. He would then release Fursona Maker later that year for free. [9]

The Bad Dragon adult toy "Dexter" is based off a design for Jasonafex's fursona's genitalia, designed by Jasonafex, which won a Bad Dragon Labs Staff Pick.[10] 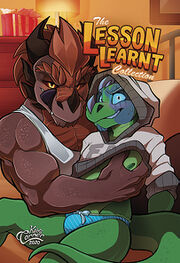 In 2015, Jason and Kabier uploaded their first furry comic Lesson Learnt to FurAffinity. The comic has since been moved to his website Jasonafex.com[11]

Later that year Jason and Kabier released Man's Best Friend With Benefits on FurAffinity that featured a love triangle between an anthro cat, his girlfriend and his stray feral dog. [13], and a short Undertail parody comic titled Undertail. [14]

The comic Servants of the Serpents would be released the following year in 2016 with new characters, villains and an overarching slave plot.[15]

In 2017 they released Double Trouble to FurAffinity, a comic featuring a female Lynx and two giant feral wolves. [16] The comic was later censored in 2020 by Patreon as they no longer allowed bipedal (Anthro) and non bipedal (Feral) sexual pairings. Patreon also had concerns that the main character did not consent on certain pages.

Jasonafex began a podcast in 2017 titled The Cuckshack, where he discusses events in the furry fandom and hosts members of the fandom as guests.[citation needed] The podcasts are often released with an accompanying animation of his and his guests' fursonas' mouths moving and gesticulating in time with the speaker.[20] The series was discontinued on 20 Feb 2019 in favor of a new VRChat series on Youtube.[21]

In 2018 Jason began hosting a community Discord server where he regularly interacts with his fans, co-ordinates weekly gaming/movie nights and ERP adventures, recreating scenarios and characters from the comics. [22]

In 2020 Jason launched a new website Jasonafex.com dedicated to hosting all of their content from over the course of the careers for both himself and Kabier. Each character featured in their comics/pinups has been given their own webpage to further flesh out their backstories, relationships and fanart galleries. [23]