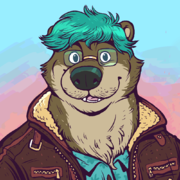 Jason Blake is the Director of Decorations for Eurofurence and Dhary Montecore's husband. Although originally born in Britain, he currently resides in Germany.

Jason has held the position of Director of Decorations for Eurofurence since Eurofurence 21, and was also previously the Deputy Head of Photography for ConFuzzled. He was additionally a web designer and developer for SoFurry, where he was largely influential for the site's design and layout since 2.0 was launched, as well as the eventual 3.0 version.

He has DJ'd at various furry events, including:

Jason's main character is an otter simply named 'Jason', and 'Blake' name is used for the character's alternate werewolf form.