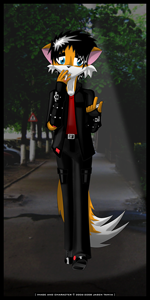 Jasen Tamiia has a double fursona, each with similar design and contrasting dispositions. One of them, referred to as Reneé, is a transgender homosexual male with a feminine build and obnoxious personality. The other, referred to as Remy, a heterosexual male of a sub-athletic build, tends to have a more contained and serious attitude. 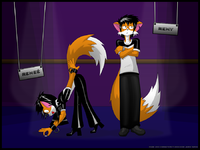 A representation of the differences in Jasen Tamiia's Double Fursona.

Tamiia also produces Electronic and Orchestral music under his own label: Tamiia Entertainment Company (formerly Black Spire Media Group) which is also an online store for his work and merchandise. Making Music since 2004, Jasen Tamiia has released 8 albums to date, including two singles.

Every drawing that Jasen Tamiia does almost always starts on a piece of paper attached to his clipboard that he has had since 2001, which has many decorative stickers on its back. Most of Tamiia's Digital images are produced in Adobe Photoshop CS3, some of his highest quality works consist of nearly 100 layers or more and an average canvas size of 6000x8000 pixels. When it comes to traditional work, Tamiia uses Crayola or Prismacolor pencils and generic artist ink pens. Jasen Tamiia always draws on a very particular kind of laser printer paper: Letter size, 32lb, 98 brightness.

Jasen Tamiia also has a kind of affinity toward BIC mechanical pencils with yellow clips.

The Jasen Tamiia name was first established in 2001, the fursona was created in 2003 and changed into the fursona we know today initially in 2006.

Jasen Tamiia first started out as an artist primarily drawing Digimon Fanart. Jasen Tamiia was originally created as a Digimon fan character, the design for the "Tamiia Uniform" is a take-off of Rika Nonaka's broken-heart shirt from the series. Like many furries, Tamiia developed an infatuation with Renamon along with other behaviors of fandom. The most influential inspiration of Tamiia's Fursona was San Renard. In 2003 Tamiia started his deviantArt account and uploaded a new drawing every day for the first few weeks he was online, among these were the first images of RenaJase (RJ), which was regarded as a separate character at the time.

During this time the RenaJase Fursona became more and more associated with the Jasen Tamiia name than the original human persona. In 2006 Tamiia created the double fursona known today as Reneé and Remy, commonly referred to as "RJ Tamiia"

On April 7th, 2007, Jasen Tamiia started his Fur Affinity page. Since then, his interaction with the furry community increased exponentially, as well as his mature-rated work.

An image from The Jasen Tamiia EGO-MEME Spectacular

February 21st, 2008 is when Tamiia released the somewhat infamous EGO-MEME Spectacular a four-minute semi-animated short featuring various 4Chan and 7Chan memes where the characters were replaced by Jasen Tamiia's fursona.

In 2009 Jasen Tamiia was commissioned to do the artwork for the new Industrial Frost Album, Assimilated. 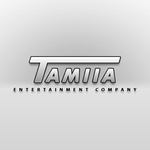 On January 2nd, reports have appeared on Fur Affinity about Jasen Tamiia's sudden disparition, after an active communication through livestreaming and updating his commission queue on website Trello. His last known online activity was of sharing a Imgur post on his Facebook page[3].

On January 3rd, several furs started posting messages of condolences on Jasen's Fur Affinity page. One of Jasen's close friends later got confirmation from Jasen's father that he passed away on December 31st 2015 "and did not suffer"[4]. His father, John Longenecker, later posted a thankful comment to Jasen's Facebook page for the support, and describing what happened as an "accident in the bathtub" on his own Facebook page[5].

A former colleague of Jasen Tamiia, Fox Azure of Industrial Frost, posted a brief eulogy on his Furaffinity and Google+ in memorial to the late icon:

"Jasen Tamiia was a remarkable member of the fandom. Showing growth in artistic finesse, and popularity at a rate that could only be described as exponential and uncanny, Jasen graced us with years and years of great art. and fanservice of any shape or form. With a "To boldly go" attitude, and a passion for the community, Jasen touched his fans hearts with a wacky, kinky, and lovable sense of humor and warmth be it on his LiveStream channel or other media. We will always have loving memories for this tragically briefly lived, yet nevertheless notable, hero of our subculture.. May you rest well, and until the day we meet again in Shangri-La; I always will fondly recall you, the lively conversations we had, and most importantly the work we did. I hope it was hardcore man, rest in peace."