Jaleo (Spain, 1984) is a Spanish furry artist. His main works can be found on Furaffinity. 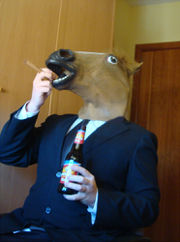 Frison and Jinggles on Halloween 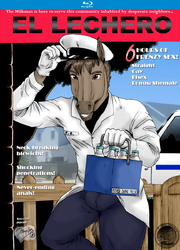 Frison as "The Milkman"

Formerly known as Bullitt Jaleo he started drawing furry since 2007, posting his art back then in Furnation. Before drawing furry style, he started drawing manga and fantasy back in 2004. Surfing the net back on those years he discovered the whole furry thing and his interest in it started growing, and then adopted this style. Main inspirations were artists such as Wookie, Dark Natasha, Chris Sawyer, Ebonyleopard, Shinigamigirl, Jace, Kenket-Blackteagan, Kaji, Nexus, Jim Hardiman... among others.

At late 2007 created an account on Furaffinity, and has been posting art since then without stop. There has been timid tries on Inkbunny and DeviantArt but always remained loyal to the same art community. Despite having the chance to work with Bad Dog Books, he remained as an independent furry artist, working regularly on private projects and commissions as well.

Traditional inks, realistic to semi-realistic anatomy proportions and facial expressions are his main characteristics, along designing horses, cars and motorbikes. As himself quotes: "I suck at digital drawing. I really need to feel the pencil and paper with my fingers, and that's why I'll never get used to a graphics tablet. Same goes to coloring, that's why I rarely do that" . The little he colors, he does it with a mouse.

He is self-taught, and his main inspiration was Akira Toriyama back in 2004 when he started drawing. He hasn't taken any art lessons nor gone to any art school. From 2004 to 2008 he was part of the Spanish Army, specifically the Mountain Unit. Due health issues (two operations in both shoulders, leaving him inactive and a 11% of disability) was deployed to office tasks, leading him to quit. It was during those evenings in the barracks where he actually developed his art skills and love for the furry style.

He does own a character of his own: Frison, who was created right after himself. The name comes from the Spanish "Friesian", which is also a horse breed, or how are called the people living in the north of Netherlands. He is a mix breed horse, no specific race, half Spanish half Dutch. His main features are his spiky mane and his thick body, ample rump and short tail. Over the years he's gone through some changes, such as aging and changes in his body (depending on the real looks of the artists). For certain time he became El Lechero, or The Milkman, an amateur porn actor, who "delivered 'milk' to his clients".

He also created a second character named Jinggles, who's a really open-minded cat. He was created due the lack of adult scenes involving Frison at first, so to compensate that Jinggles took a sexual role in his pictures. Over the years thou the roles have changed, and there might be a chance to addopt this character. His main feature, besides his promiscuity, is the big jingle bell that is attached to his necklace.

So far the artist hasn't attended any furcon. Once finished his Tourism major studies he'd like to organize one, to give the chance to the local community and the one over the world to know better his region, the Golden Coast (Costa Daurada) in Catalonia, Spain. This is yet to be seen, for the idea even if big, the Spanish community is very little, and it would take years to make it happen. This is part of a dialogue: "Someday I'love to be able to host a big con here. We've got good arguments to make it happen: We have good clima, the Mediterranean food, low prices, great hotels with convention centers, not to mention the coast and beach right next to them, and on top of that, one of the best theme parks in Europe which could easily accommodate about 2000 furs in their hotels... just think how much fun it would be to see hundreds of fursuits walking around the park, children would love it" .

It is also known that both the artist and his character/fursona Frison are bisexual. Yet Frison having appeared in different affairs with several other fursonas, there's no knowledge of having a mate or significant other since 2010.