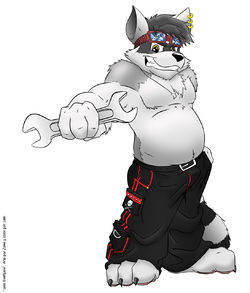 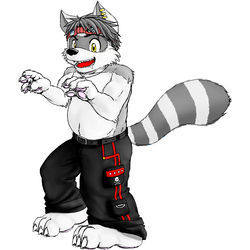 Jale Amadeus Swiftpaw, (formerly Jale Albatros, also known as Alex Swiftpaw and Alejandro Swiftpaw) (born October 7, 1986) is a venezuelan furry fan. His first character was a bear, but went through other species, following raccoon (procyon lotor), tanuki and finally wolfcoon (wolf and raccoon hybrid). As of 2015, he reverted back to raccoon only without changing his physical appearance. He also has an otter as an alternate character.

His origins are unknown as he never met his parents and was raised by humans. At the early age of 13 he left his adoptive parents and joined the army, where he began his military career and eventually became instructor at the age of 15. He's a specialist in firearms, a great mechanic and exceptional pilot in all sorts of airships, from small planes to big warships.

Upon his retirement at the age of 18, he started his entertainment career as a DJ in many night clubs.

In Second Life, he can be found as Jale Swiftpaw (jale.albatros).

Jale's build is wide for his medium size, has a round belly and is muscular, but not necessarily very strong. He has black hair and honey yellow eyes. He's bisexual, but has a higher preference towards males. He doesn't have a fixed set of clothes, so he can be seen wearing practically anything depending of the situation, but he wears his googles almost all the time. He is usually seen carrying a big wrench in one of his pockets, all of this until early 2015. Then, as he is entering maturity (early 30s), wearing his goggles are now optional, his ear piercings have been completely removed and the big wrench is replaced with a tools belt for the sake of realism. He is a bit chubbier and more muscular and his fur grew longer, especially on his lower jaw acting as a short beard, although no drawing depicting this stage of maturity exists yet.

He lived in Maracay most of his life, a city located in the northern region of Venezuela and is an Advanced Technician in Computer Science. He used to work for the construction industry selling power tools and spare parts for them. As of March 2017, he moved to Chile due to the severe humanitarian crisis his country is going through, looking for a better quality of life.