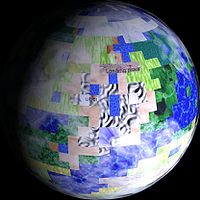 In the universe of Furscape MUCK, Jalan (also known as Wildplanet) is an inhabited extrasolar planet in the system of the star Felios.

Jalan is very similar to Earth, including the atmosphere (71 % nitrogen, 26 % oxygen, 2 % helium, 1 % argon). The planet has a hot centre beneath a hard surface of tectonic plates, with several volcanoes and sources of helium. The rocks are often colourful. The surface is of uneven height. The lower parts, about 50% of the total surface, are water-covered forming an ocean. The higher parts are divided in three large continents and several smaller islands. Both continents and islands feature high mountains (up to 10000 m above the ocean level). There are climate zones like on Earth.

Jalan has a species-rich native flora and fauna, resulting from many million years of evolution. Due to the similarities with Earth, many examples of convergent evolution can be found, such as plants using the light from Felios by photosynthesis as energy source.

Notable are the many flight-capable species, such as the marsupial Flavians, and the variety of large species evolved in the oceans.

Many animal species can speak, facilitating intra- and inter-species communication, sharing of thoughts and propagation of culture and ethical values.

Interbreeding is possible between individuals of quite different appearance, due to the low genetic variability. The term species is thus not applied in the strict meaning for Earth. Even more different forms can have offspring, but infertile or fertile with other cross-breeds of the same parent species.

Besides the native species, some alien species have settled on Jalan, like the Kirrus from Kirronia and the irbis (genetically modified snow leopards) from Earth.

The ability to talk with other individuals has led to the establishment of a complex set of ethical values and habits. The fundamental idea of this philosophy is the acceptance of being part of a larger whole (the planet's ecosystem) instead of superiority of a single species over others. The rules of society are derived from this, covering inter-species relationships, including predatory behaviour, and limiting the impact on nature (both plants and fellow animals) by ones behaviour.

As a result of this, the use of artificial, purpose-built weapons is banned, and indeed, the thought of ever making or using such a device is far from Jalan's individuals, even in hunting situations. As predatory species are well-equipped with inherited abilities to kill the prey, there is little need for artificial weapons.

Even the most-advanced species live in conditions that seem primitive to a visitor from Earth, due to the restrictions. Metalworking is almost unknown, for example. Not many species possess the ability to use their front paws for such kind of work, anyway. Pollution of the environment is avoided by all inhabitants.

The places of Jalan are not linked by roads, but only by small trails. A lot is transported by sailboats on rivers, lakes and along coasts. The most evolved native form of transport are helium airships.

According to their habits, the individuals of some species live alone, or together in families or groups of various sizes. There is no larger governing body or organisation above these groups.

Out of respect for nature and the inherited traits (like fur), clothing is deemed optional and is not worn by most individuals, unless required as protection against coldness or unusually extreme environmental conditions. It is considered respectful to walk barepawed on the unpaved trails of the continents, instead of distancing oneself from nature by wearing shoes.

Any visitor to the planet is expected to follow the rules and lifestyle on the planet, and not acting in any way to disturb the planet life in a non-recoverable way. The introduction of new species can be seen as such a behaviour, and the appearance of the Kirrus and others are only acceptable because it did not topple the ecosystem (as observed in the centuries since).

Jalan has no states or central authorities, instead its inhabitants are organized in tribes with overlapping territories. As the planet is regarded as a deity, there is no concept of land ownership. The common ethical principles are enforced on an individual basis. Spaceships should only land on solid rock, so that no plant or animal life is damaged, and use their own guidance systems as there is no instrument landing system.

Jalan was designed for Furscape by unci with help of Triggur's Terraform software. It can be visited in Furscape by using the uncia spaceliners from Annyrion or Amazon. Visitors are asked to adhere to the rules lined out on the Jalan (Wildplanet) Webpage, and to consult realm information by typing realm and realm rules.