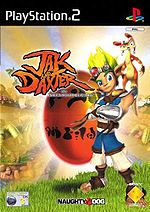 The Jak and Daxter video game series is an adventure platformer series designed by Naughty Dog. The first game, Jak and Daxter: The Precursor Legacy was originally released for the Playstation 2 console in North America on December 3, 2001 and has since had three sequels, as well as a manga. It has grown into one of the three most popular platformer franchises for the Playstation 2, along with Ratchet & Clank and Sly Cooper.

The protagonist in each game is a silent boy named Jak. He has pointed ears that resembles those of an elf. His smart aleck sidekick, Daxter, is an ottsel, a hybrid of otter and weasel. His character was originally the same species as Jak, but due to an accident, he was transformed into his current form. Daxter's character was enough of a hit that he produced his own spinoff.