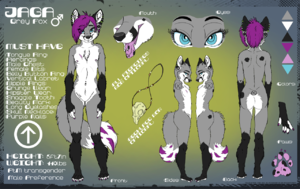 Jaga Grey Fox, also known as Redrumwolf, Jaga Fhang on Second Life (born August 30, 1991, in Kansas, USA), is a genderqueer grey fox furry artist who lives in Pennsylvania.[1] They grew up in Glen Mills, Pennsylvania. As of August 15, 2012, Jaga is in a committed relationship with Cyclone Fusky.

Jaga first appeared at the Furst State meets in 2009. Their first convention was FA: United 3 in 2010. They have also attended Furry Weekend Atlanta 2012 and 2013, Furstivus as a staff member, a handful of the Furst State meets, the New Years Furry Ball, the Pasadena Doo Dah Parade, and the NJ FurBQ as staff.

Jaga has recently retired their fursuit made by NightFell and Shadowsani, and plans to get a suit in the future from PhoenixWolfSuits.

Previously known on Fur Affinity as Furredfem, they adopted the unused account of Kashmere, Redrumwolf, with Kashmere's permission.[2]

Jaga Grey Fox's is a FTM transgender grey fox which stands at 5ft 7inches (1.7 meters), and weights 113 pounds (51.2 kilos). His coloring is grey with white and black markings. He has blue eyes, purple hair and markings, and a tail length of 4 feet (1.2 meters).