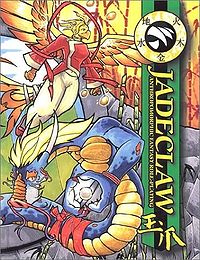 Jadeclaw, designed by Chuan Lin and released in 2002, is a follow up to the Ironclaw role playing game from Sanguine. Unlike Ironclaw, which was set in a world that closely mirrored medieval Europe, Jadeclaw is set in the Far East (Chinese and Japanese equivalents) during the same time period. There are also some minor rule changes and revisions between the two, which were incorporated into the later Anniversary release of Ironclaw.

Martial arts have been added to the character traits, along with playable non-mammalian races such as Reptiles, Birds and Dragons. Various kinds of insects are also available as non-player characters.