For people and other characters by this name, see Jade. 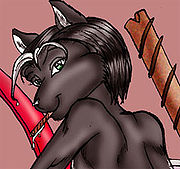 Jade is a character in the webcomic Jewel Vixens. A 19 year old black vixen, Jade was trained as a ninja in Japan ever since she could stand on her own two feet, Jade's skills as both a fighter and a scout are unmatched. However, her overconfidence is what usually gets the best of her, but she doesn't seem to mind. She can handle virtually any melee weapon she lays her paws on, and despite her size she is quite strong. She's also the sultry, seductive type that's a tease to the guys and a bane to feminists everywhere. Another weak point aside from her ego is her accuracy with pistols. Being that she's hardly even touched a gun before meeting the crew, she still prefers to use projectile weapons that she's more adapted to, such as throwing stars and boomerangs. She also is fond of using her preferred weapon, her katana. She has developed a habit of teasing Aquamarine, making fun of her teammate's shy and easily-embarrassed nature, though she tries to keep from emotionally scarring the poor girl. In spite of this, Aquamarine accepts the fact that Jade won't ever let her down with a situation gets serious (that doesn't keep her from making it LOOK otherwise, though). She considers Emerald to be her best friend.

Jade is completely black all around, though her headfur is black and white (black headfur is short and barely reaches her neck; she has a few thin, sharp, white bangs hanging down over her forehead) and her eyes are a deep green. She's a short vixen too, but her body form is well curved, especially in the hips department. The way she dresses is similar to Emerald's style, but a bit less restrictive.