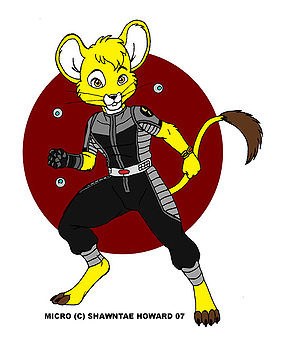 Physically Jacob has the body of a mature rodentian, mentally he's a genius, but emotionally he is often very much like a child. Shy and seeking approval, Jacob is determined to prove his worth to the rest of his team mates. His origins are blurred. The result of direct genetic mutation and engineering by the alien invaders, Jacob was created for the sole purpose of being one of many ship tech mice. A biochip was inserted into his brain to help increase his mental capacity, but it also allowed him to gain access to latent powers. Now Jacob is able to increase and decrease his mass and size at will. And while he prefers to remain the size of a normal mouse, he can grow as big as skyscrapers or as small as the eye of a needle.

Now Jacob is practically a living computer, capable of processing and calculating computer information in nanoseconds. This ability allows Jacob to practically do anything with a computer. It also lends to his strong urge of curiosity and creativity. He has become quite the inventor, creating new gadgets or re-creating old ones.

Due to Jacob's heightened intelligence he sees things in a rather matter of fact, black and white point of view. Often over analyzing things causes him to feel uncomfortable in normal environments and situations, thus he tends to be very shy around others. These feelings of shyness contradict his need for acceptance, which results in his doubting his abilities when forced to work and rely on others. Finally, being from Earth where humanimals are quite different, Jacob as a strong instinctive fear of felines. And while he's managed to subside those fears by living with Maxwell, Katherine Fela and Catrina Fela, he has not totally overcome them.