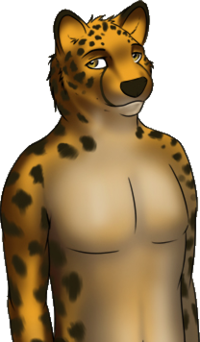 Jacktail is a furry student who lives in Derbyshire, United Kingdom.[1] He joined the fandom in March 2013, after many years of interest in the popular subculture, and works towards creating websites to give back to the fandom.

Jacktail's fursona is a cheetah,[2] and is just his reflection of himself as one of his most favoured animals.

FURSTRE.AM was Jacktail's first website, created in August 2013 to offer live video streaming for a few of his friends. The site was used by many artists and fursuit-builders in the community to stream them working, and interact with their customers and followers.

The site had over 12,000 registered users and at one point had over 200 streamers broadcast each month to over 40,000 users. However, usage fell off, and the domain was abandoned in September 2017.

Fursuiter.NET is Jacktail's new website that is a photo sharing community site for fursuiters, it has now been opened as of November 2015 in a Beta.