Jack is a furry webcomic by David Hopkins. It is set in a world populated by anthropomorphic animals and focuses on judgment and afterlife, which function according to Christian beliefs, and is noted for its depiction of "rape, drug use, swearing, graphic sexual acts, incest, cannibalism, nudity, savage violence, and images of Hell."[2]

Jack focuses on its title character, a wizened green rabbit who lives in Hell. He is the embodiment of the deadly sin wrath, whose punishment is being the Grim Reaper. In life, the unfairness of some deaths, particularly towards the ones he loved, made him angry.[3] In his position as Grim Reaper, he now has to witness more death, the cause of his wrath. Jack attempts to remember the sins he did in life in order to be forgiven for them. This is hard for him as his other punishment is having no memory of his life on Earth.

Jack was joint winner of the "Best Dramatic Comic" award at the Web Cartoonist's Choice Awards in 2004.[4] 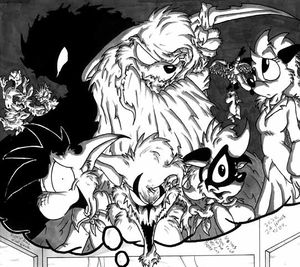 Jack covers subjects related to the attitude a person can lead in life and its consequences to them and to the people around them. Frequent features are disease, rape, murder, suicide, bereavement and redemption. The comic is divided into a number of arcs (subplots) of varying length. Artwork style and presence of color differ from arc to arc. Arcs take place on Hell, Earth, Heaven and Purgatory. Arcs set on Earth (usually revolving around Jack's job as Grim Reaper) take place during different, not always consecutive, time periods. In Heaven and Hell there is no concept of time.[5] The eyes of characters symbolize their status in the Jack universe: sins have no pupils; living souls and angels have full pupils; the souls of deceased persons have "pin-prick" eyes as long as they do not recognize their sins.[6][7]

The comic centers around decidedly mature themes, as demonstrated by the third strip in the debut arc which allowed Fnar to meet his mother, restrained to a cave wall with the rock actually encompassing her right leg and holding her arms as if it were eating her. The mature themes of the comic are made quite plain at that time, as the woman bore a stab wound under her left ribs near the stomach and also had her throat slashed. The blood from these wounds is still dripping in the scenes, and Fnar himself looked grisly as he was "aged" by Jack in stages to the age of a preteen boy.

Jack's plot bounces around quite often, but it remains true to the Hell theme for the most part. On occasion, strips are published which pertain to real world events, like the Angry Brian story arc which depicted events similar to those of the horrific Columbine High School Massacre. Other features of the comic include the appearance of real places like the former World Trade Center that was destroyed in the infamous and very tragically devastating terrorist attacks of 9/11. The Angry Brian story arc sparked heavy feedback from the readers, and also helped to earn the comic a large reader base.

Jack is based on Christian tradition, but the world and its rules are inconsistent with typical Christian views. The angels are the forces of good, and the sins are evil personified. These two forces do not fight each other much in the comic; in fact, for the most part they appear to work together without any major problems, although this may be due to the focus on Jack, the most amenable of Sins. Many of Hell's denizens enjoy inflicting pain on one another. However, there is confusion at times, with people who were good in life ending up in Hell. The unfairness of the fates of many of these people, and the observations of Jack on the unfairness of life, are central themes.[8]

The comic can be morbid, but it has its tender moments and optimistic highlights. Not all the characters of the comic are doomed to Hell for eternity. They all have a chance to eventually live on Earth again in new forms as a test to see if they have "learned" from their previous life's mistakes. If so, they are admitted to heaven. If not, they are condemned once more to the bowels of Hell.

The original host of the site is no longer working as of 2018, but he has posted all pages in a ZIP file dropbox, with claims of future re-releases of them.

David previously created comics such as Rework the Dead. After creating "Trixi and Tet" (which later became the third story "Arc" of Jack),[9] his then girlfriend (and later wife) Katie suggested that he should break out to a bigger audience. Initially hesitant as he was used to a smaller audience, he then expanded. After "Trixi and Tet" was published, he had around 5,000 readers.[10] Since then, Jack has grown in popularity, with four published comics books, spin-off comic books, and a growing fan base.[11]

The comic has since made references to other comics in the furry fandom, including guest art from furry fandom such as Albert Temple and Candy Dewalt,[12][13] and Jack also appears in other furry webcomics such as A Doemain of Our Own and Gene Catlow.[14][15]

In November 2018, David announced that the pholph.com website would be permanently offline and he would post existing and future strips on Fur Affinity. He also made an archive available for download.[16]

In October 2020, David announced on his FA account that the new home of the comic would be Comic Fury. [17]

Jack
The embodiment of wrath, Jack is a wizened green rabbit, wearing a ragged, brown cloak and carrying a scythe. His job is to collect the souls of the dead and lead them to their final judgment as the Grim Reaper. The plot revolves around his attempts to recollect the sins he committed during his life, which have been removed from his memory as part of his punishment.[18] Due to his lack of memory, little of his life on Earth is known, but he does remember parts when angels from Heaven allow him to. It is known he was created by humans as part of an experiment,[19] and his anger was triggered by the death of another similar experiment called "Jill". He was born without genitalia for fear that he would reproduce. It is also becoming increasingly apparent that most of the embodiment of his sins are related to the falling out of mankind sometime between Jill's death and the beginning of the comic, possibly through direct killing, by way of incurring the "wrath" of Jack.[20]

Fnar
Fnar, who died while still in utero, appears as a child dressed in a blue and green sailor suit. He is missing his nose, because when his form in hell was being created, a crow tore it off. Although Fnar died unborn, and hence without sin, he was sent to Hell, primarily to keep him close to his mother. Curious, trusting, and always smiling, Fnar is unaffected by the horrors of Hell because he died innocent and ignorant. He spends much of his time exploring Hell's riotous and fascinating landscape, while occasionally providing companionship to the reaper, Jack, or reuniting with his Hell-bound mother. His name is an acronym for "For No Apparent Reason".

Drip Tiberius Rat
The embodiment of lust, Drip is a monstrous blue rat with distinct, black scars around both eyes. In life, Drip was a serial rapist and murderer.[21] In death, Drip perpetuates these sins and shows no regard for his own redemption, making him a terrific threat to anyone who ventures too near. Jack, in particular, is tormented regularly by Drip. As part of his punishment, Drip is unable to feel any sort of gratification for his sins in Hell. Drip appears in other projects by Hopkins and functions as his nickname.[22]

Farrago
A young angel who often struggles to make sense of the politics of Heaven and Hell. She is portrayed as a ferret with bloody stumps protruding from her back, suggesting that her wings have been violently removed. A sympathetic character, Farrago develops an affinity for Jack upon their first meeting. She and Jack collaborate against injustices on numerous occasions. During a conversation with Todd, she reveals that in life she was a member of "Her Majesty's Royal Armed Infantry in the days before guns and artillery."

Central
A senior angel who adheres strictly to God's rule. A hybrid, her breed has been described as a "Hodge-Podge." It was revealed that Central and Jack were close during life but currently have a difficult relationship.[23] Although Central outwardly expresses a disdain for the reaper, she is, by nature, deeply dedicated to his redemption. She often struggles with her conflicting feelings for him.

Others
Other characters include the other five sins, Vince Van Morrison (Greed), Dr. Kane (Envy), Bob and Lisa Vorsh (Gluttony), Emily (Vanity) and the unnamed Sloth. There are also denizens of Hell, Heaven, Purgatory, and characters living on Earth. God also makes several appearances as a ewe.

Screenshot from the Jack platform game

Four comic books containing collections of Jack comics (also referred to as the "dead tree versions") have been published by FurNation. These include bonus story arcs not available online. There are also comic books by Hopkins and guest writers set in the same universe as Jack. These are Cliff (2 issues) and Long Island (1 issue). The former is a joint project with Roz Gibson, the latter is with Katie Hopkins.[11] There is a fan-made freeware platform game based on Jack.[24]

Jack has a mixed reception. Positive reviews claim Jack is enjoyable because the story arcs contain meaning and comments on morality. One review of it said, "Each story arc has been deeper than the last, showing the politics and struggles of those that control Heaven and Hell. Each story has a moral to it; a massively deeper meaning that gives the reader a glimpse into his or her own soul. Jack is philosophical. Jack is intense. Jack is violent, sadistic, cruel, merciless, and never holds back a punch. Jack is also perhaps one of the absolute best comics on the web today. It takes an iron stomach to be able to see some of the images that David presents to the reader, but if you can handle it, you'll be hard pressed to disagree."[2]

However, critics attacked Jack because of these attempts to make serious stories. One wrote, "To people who value glitz over substance, Jack can pass for a deep and thoughtful meditation on the meaning of life, death, retribution and punishment. But stop to think for a moment, and what once looked like depth is really just so much chaos. That's too bad, because Jack is a comic that so desperately wants to be taken seriously, so desperately wants to shock and appall "the squares" with poorly rendered guts and gore, so desperately wants to be oh so edgy."[25] Others have complained about the use of graphic violence, the way that it deals with Christian issues, and spelling mistakes, with one review saying that, "Jack could benefit from a good editor."[26]

There have been many cameos on Jack, including appearances from Pink, Skye Bluedeer, SueDeer, Mab, Gene Catlow & Cotton, Vinci & Arty, Silverblue and Trixi & Tet.

Mab of Mab's Land and DMFA also drew a series of chibified versions of the characters of Jack. These are displayed in Mab's Chibi Hell.