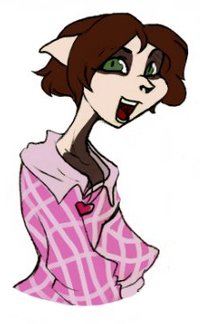 Jabberwockychamber, also known as Ashley, Ashers, and Jabbers (born August 17, 1989), is a female freelance artist of ACT, Australia. She is still a citizen of the United States, being a resident of Indiana and past resident of North Carolina.

She joined the online art world through Fanart Central in 2002, later moved to deviantART, and eventually found a home in the furry fandom through Fur Affinity around 2005. Fur Affinity is her only active account.

Jabbers began drawing as soon as she could pick up a pencil. Like many furry artists, Don Bluth and Disney films greatly inspired and captivated her at an early age. She is prolific in the field of fanart, the genre covering roughly 87% of her online gallery. She began with Kingdom Hearts, The Nightmare Before Christmas, Corpse Bride, and Squidbillies, and now mostly works with Treasure Planet, My Little Pony and Disney.

Jabbers' style is a mixture of all of the fandoms she has previously worked with, especially Tim Burton and Disney. In much of her work, her characters are drawn with large eyes with tiny pupils, or long necks and torsos, as influenced by Burton. Yet some characters are more naturalistic.

While Jabbers does not have a fursona, or believe she is akin to any animal, she has a few characters that she considers original. She has a special interest in cats, brought on by her admiration of the Treasure Planet character Captain Amelia, and so sometimes represents herself as a Felinid or her Ball Python/Feline/Kangaroo/Dragon hybrid. Her favorite species of animals to work with include felines, reptiles, dragons, canines, and rodents, though as a commissionee she is prone to working with any and all species.

Jabbers does cosplay, and has dressed as Doctor Doppler, Captain Amelia and Jane Porter, all Disney characters.