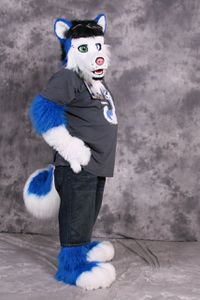 JJ found the furry fandom through exploration in Second Life in 2008. After meeting furries from other places in the world, he decided to seek out other local furs and, through a stroke of luck, saw a news article in 2010 featuring Snap E. Tiger and got in contact with him. This led to him getting more involved with the Furbraska group.

JJ currently serves as staff for Furry Migration serving as a co-head for the registration department.

JJ Husky's fursona is a blue and white husky. He has two forms; an adult character and a littlefur character. There are no differences in the fur pattern or coloration between the two, and no other differences except for size.

JJ's fursuit began as only a partial suit consisting of handpaws, foot paws, a tail, and a head. JJ was started in 2010 by Snap E. Tiger and has since completed a bodysuit and new handpaws.

JJ's full suit debut was at Midwest FurFest 2014 where he could be seen wandering the halls of the convention center and dancing his way through the fursuit parade.

He is involved in sports such as disk golf, ice hockey, golf, bowling, softball, and volleyball, and likes to watch American football and baseball.

Other interests include board games, video games, Magic: the Gathering, and Dungeons & Dragons.