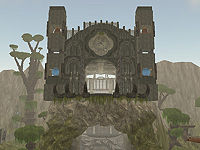 The Cathedral Roost at the Center of the Isle of Wyrms

The Isle of Wyrms is a location in Second Life, created by Daryth Kennedy and Onix Harbinger, and is the home for the popular Council of Wyrms RP and dragon avatar marketplace. One of a kind dragon avatars can be purchased here, but for any newcomers, they can only be purchased in limited numbers on the Solstices and Equinoxes. This is to ensure the relative rarity of dragons in Second Life, at least the full-size dragons. Dragon species range from the common Dungeon and Dragons dragons to more unique ones of Eastern variety or even Egyptian Anubises. The Isle itself is ruled over by Daryth and Onix and governed by a High Council of Wyrms. This governing body deals with the construction of the island, as well as rules, the execution of rules and the planning around events. Beneath the High Council, are Citizens, actual residents of the Isle who market their goods or go along their day by day routines, often making time to aid and assist any newcomers to the Isle who may be lost or confused. The third tier down is subdivided into 3 councils: The Council of Wyrms, the Council of Wyrmlings, and the Council of Wyrm Hatchlings. Here are where the common dragons lay. The only requirement for each council is to purchase the corresponding avatars. An open sandbox and marketplace is available for public use. The Isles now consist of 13 regions ranging from Cathedral (where the Avatar vendors are located) to Limbo (location of the Sandbox and Marketplace) and include allied islands such as Eragon (Eclectic theme), Eldamar/Imladris (Lord of the Rings Elven Themed) and Hatchie Haven (Hatchling dragon themed).