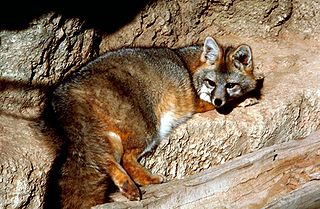 The Gray Fox (or Grey Fox) is either of two species of the genus Urocyon, which are indigenous to North America. The term usually refers to the much more common Urocyon cinereoargentus, found in almost every corner of the continent below the timber line. The Island Fox (Urocyon littoralis) is found in the islands off the coast of Western California and there is some debate as to whether this should, in fact, be considered a separate species.

The Gray Fox's fur is a mixture of black, white and grey hairs on the head, back, and tail with rust-red markings on the ears and flanks, along with white fur on the muzzle, chest, and belly.

Found in North America, the Gray Fox is unique among foxes in that it can climb trees like a cat, which gave rise to the moniker "tree-climbing fox". 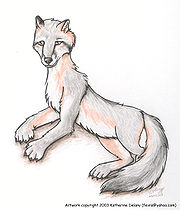 Illustration of a quadruped Gray Fox.