This article is about the FC event. For the personal artists' challenge, see Iron Artist (challenge). 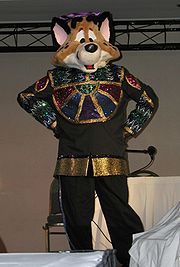 Iron Artist's nimble cheetah host Seurat is about to unveil the secret media in 2002.

Iron Artist is an annual artist competition held at Further Confusion, modeled after Iron Chef, a culinary TV show. Three artists are randomly selected out of those who sign up for the competition, and are called forth from the audience to throw a gauntlet to an incumbent Iron Artist of their choice. (Unlike the original show, each Iron Artist gets to choose their own specialty title; past titles have included "comic", "cute", "spotty", and "violence".)

Within 30 minutes, in front of the cheering audience, each of the three Iron Artists and each of the three challengers must produce a work of art in their respective category, to be judged by a set of judges (usually Guests of Honor or previous competitors). The hard part, however, is the medium, which none of the artists are aware of until the start of the show:

Beginning with 2002, the format of Iron Artist more closely followed that of Iron Chef. A roving floor reporter was added, and commentary during the competition was provided by Nicodemus and a pair of color commentators. Battle Cake Icing also included an introductory "medium video", featuring the tag-line "Like a breaking wave..."

The event was created by Higgins Dragon. It has been run by Nicodemus since 2005 with continuing support from Higgins.

One of the great champions of the competition is oCeLoT, who won her Iron Artist Spotty title in 2002 and held it until 2007, at which point she handed over to Iron Artist Control Point, Egypt Urnash.

The current longest-standing winner is Marci McAdam. She has participated in and won every Iron Artist competition except for 2003 when she was unable to attend Further Confusion.

Iron Artists and challengers by year, winners are in bold:

The secret ingredient for Iron Artist at Further Confusion 2006

D.C. Simpson was drawn as judge in the 2007 competition, but was not in the audience and so lost his place.