EYE COLOR: A nearly black hazel or a deep ocean blue depending on the lighting of the room. 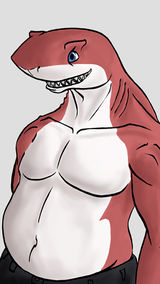 CLOTHING His favorite things to wear are his black jeans or his black speedo, and sometimes with a sleeveless shirt of either white or red.

NATURE Knows how to be dominant, especially with his pets, though he prefers to be tender and is somewhat submissive naturally.

ABILITY When RPing, Iron has telepathic powers. He can hear thoughts and speak in thought, as well as push a thought into another persons mind or control their senses to make them see/hear/feel whatever he wants (though the latter details require him to concentrate). He often will use these abilities when with a lover, sometimes making them feel like he is physically melting around them, or any number of other tricks.

Unlike most biologically correct sharks, Iron does not have claspers, he has much the same penis as a dolphin, where it is tapered to a point and has a slight "S" shape to it, he does not have a slit and it hangs free when flaccid, and the balls are external much like a humanoid. The exact dimensions are 7" long, 8 when straightened, and 2 inches diameter at it's base tapering to a 1/4 inch point. It has a ridge extending down it's sides, and unlike a dolphin it is not prehensile. The color is a similar shade of red than the skin tone, but depending on the state of arousal it can be darker or lighter.

This nickname came from two places. Firstly, as a child, he was never able to fully let go of the "finger sucking" phase, and all throughout elementary school continued to have a finger in his mouth all the way until he got braces, at which point the metal began hurting his fingers. From that day forward, he began instead, to chew on pennies and other metal objects because he could not stand not having something to chew on and to this day can't stand gum. This lead to problems through middle and early high school, as he was bullied and as such would often be slapped and made to swallow whatever he was chewing on. At one point, his friends speculated he had about a pound of metal in his stomach, and so they started calling him "Iron Gut". The second place where the nickname came from was about how if he was ever in a fight, he could take any and all blows to the stomach and not be affected at all, as opposed to when opponents went for other areas like the face or chest. 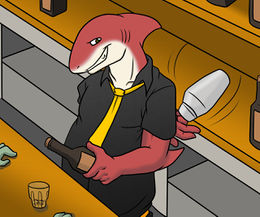 So currently Iron is a bartender at the Sawmill Pizzeria in Seaside Heights NJ. He is the master barkeep in charge of all the other bartenders, and puts on a 20 minute scheduled juggling show on the stage every weekend at 8 and 9PM. He arrived at this job slowly, after having grown up with the Sawmill as his favorite pizzeria anywhere in the state or country. His folks would bring him there nearly every other week, and when it came time for him to get a job, his first job was as a waiter there part time. Over the course of high school and college, he held that job as a waiter while he went through many other part time jobs until the day he decided to get his bartending license. It'd been something that was weighing on his mind like a subtle hat for years that bartending would be the perfect blend of his juggling abilities and his people skills. He changed job titles the day he gained his license, and worked his way up through that position bit by bit, continuing to learn and improve his flair technique and juggling prowess as well.

He likes almost every variety of it save for hard vore and unwilling digestion without reformation. He loves being both the pred or the prey, and is able to swallow mostly anyone, though some with much more effort than others. Soft vore, Anal vore, Unbirth, Pouch vore, and Cock vore, though he only does that last with people whom he feels exceptionally close to due to how personal it is. He has the ability to control his stomach acids in order to keep the swallowed person alive indefinitely until either thrown back up (sometimes needing for him to swallow his arm and pull the prey back out if they are big or get stuck somehow) or expelled out the other way whole.

If he does digest someone, the acids in his stomach work first by softening the skin and producing a tingling sensation before slowly making the prey lose consciousness for the rest of the digestive process. The digestive process works in one of two ways, the first is the half-digestion effect, where Iron will only digest an absorb all of the prey's fat and add it to his own before puking back up a fully intact, but ultra-skinny version of his prey (the prey then quickly must regain consciousness and eat a MASSIVE meal within a few minutes in order to survive). The other is to fully digest the prey, right down to the bones and then to dissolve those too. After digestion, the consciousness of the prey is sometimes shared in Iron's mind, at least for a short while, before being transferred somewhere else.

Iron definitely is a fan of Stuck, where one or more furs are in the situation of being literally stuck in a small space like wedged in a small dog-door and unable to free themselves easily. He is a switch here as well, loving to get to push or pull to help free another just as much as he loves getting stuck himself and requiring someone else to push against his rump to get free.

Though he's yet to try inflation himself, he is a big fan of inflation except for popping. He especially loves cum inflation and other forms of liquid inflation, from either orifice. Gas inflation not so much but he's not averse to it. Of course loving inflation he's also very attracted to size in terms of fatness as well, not particularly when it's overdone or when there's a lot of folds and rolls, but big and heavy is always a huge turn on for him, especially in a rump, which is one reason why he finds Charizard so attractive is the shape of the body forming a MASSIVE belly and rump with short thick legs leading up to a smaller torso. Along with the fat also comes a liking of smooshing and face sitting, again, he's a switch, loving to be smooshed or doing the smooshing.

This is definitely one of his more well hidden fetishes, as fear of the embarrassing nature of it all, but it's also one of his favorites. He loves anything to do with diapers, whether they are clean or being filled to the point of bursting. He occasionally will purchase a box of adult diapers and dedicate a whole day to not using the bathroom and toilet. It's also a great joy of his when he's in a dominant mood with his pets to make them wear diapers and use them, especially if he can work sex into it at the same time. 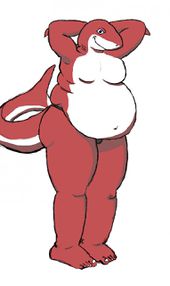 The ultra-fat version of Iron Gut. Same character, beliefs, and body dimensions, except for an extra 200lbs, putting him somewhere within the 400 and 500lb range. He is very soft and most parts of his body you could poke and squish the fat down about 3 or 4 inches, making him quite an excellent pillow to sleep on, and the increased mass also makes him warmer in this form as well.

In this form he is especially eager and turned on by getting to either face-sit or otherwise smoosh others beneath all that soft fat of his, though he is always careful to put on just the exact right amount of weight to keep from hurting someone, but feeling to the recipient as if he was putting every last ounce of his onto them. One of the grand benefits of this form when smooshing is that the fat will roll all the way over and completely conceal anyone underneath him, making it even better for the recipient. 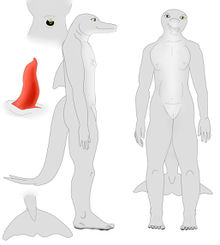 EYE COLOR: Left eye is gold, the right eye is green, though the two shades are close to each other in hue and tone.

SEXUALITY: Straight, though very open to either gender.

OCCUPATION Assistant manager at the Sawmill Pizzeria at the jersey shore. He often does whatever jobs are needed to be done when the staff is low in numbers.

BUILD Slim and streamlined. He has the smoothness of a feral dolphin but the body, arms, and legs of an anthro.

BLOWHOLE His blowhole is placed near the top of his neck and is pierced with a gold ring. He can breath through this at will and there is no sense of smell or taste when he breathes through just the hole.

NATURE Very shy and timid in nature, often clicking when introduced to someone new or when doing something deviant/embarrassing. Submissive but not overly so, and willing to try at least anything once.

Very warm and nurturing due to having taken care of his younger brother on his own for 4 years, and he will nurture those he cares about in an almost motherly fashion. He's very casual about life and has a very easygoing nature, but is surprisingly nervous whenever anyone gets close to him in any way (even before the accident that left him alone). 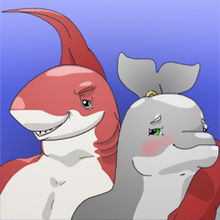 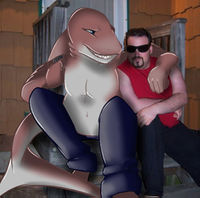 Brian McMiller. The guy behind the shark, is quite a bit of a man-slut by his own admission, and backed up by his youtube and xTube channels. He also admits to being mediocre at best when it comes to drawing and creating character representations on the computer, so he often will only get commissions when he has ideas for images he'd like to see. He has done sketches and drawings for people on occasion and believes himself to be good at coloring inked works, though he doesn't do it often because of the time involved in his style of coloring.

He is currently a college student living in Perth Amboy, NJ, and is living with his parents and grandmother currently. His parents know of his bisexuality and furryness, though his grandmother does not and the entire family wants to keep things that way. His parents are rather conservative, especially his father, and he has been known to poke fun at Brian's gayness from time to time.

He modeled Iron Gut off of himself and thus he shares essentially all of the same fetishes and interests, the only difference being in terms of weight, Brian is around 305 lbs in real life as opposed to the 270 of Iron Gut.

Brian is a devout skeptic and atheist, and often will post to his Furaffinity journal or Livejournal rants and observations about human nature or events, or on occasion even his responses to trolls that comment on his youtube videos.

He is also an avid juggler, often showing off his abilities at whatever convention or furmeet he attends. He can juggle many different objects from balls, rings, clubs, and cigar boxes among other things, and has spent the last 4 years or so practicing his skills.

He is also a podcaster, having made multiple running podcasts in the past, none of them furry related though. He intends to start a furry podcast sometime in the near future, and he hopes to be able to do it with Shy Matsi Lupine.