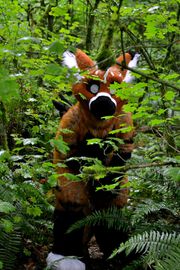 Ino created the first Dutch Angel Dragon named Telephone. This iconic character is most commonly known in the form of a fursuit costume that was made for Ino and built by Carly of PhoenixWolf Fursuits. Ino is the primary performer for the Telephone suit and is responsible for the character’s personality, design, and backstory, as well as the development of the Dutch Angel Dragon species and lore as a whole.[7]Telephone likes to hug to people and likes to get gifts.

Did you know? Ino's husband, Cerros, has a character (and fursuit) named Radio (which is cute because compliments Ino's fursuit Telephone).