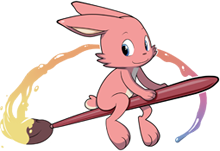 Each cache VPS can store the data typically requested from it over at least three days.[17] They run on mainline nginx, supporting HTTP/2.[46] Over 20 million pageviews were served in October 2019.[28]