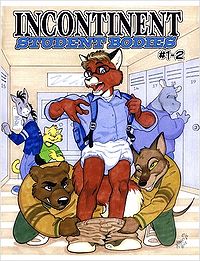 Much like the comic it parodies, ISB portrays furries in a university-type setting (in ISB's case, Ashton Hall at the University of Canterbury), dealing with various personal, public and relationship issues. However, unlike ASB, the ISB series is primarily about how different cast members deal with problems and misconceptions (deserved or otherwise) surrounding the adult baby and diaper lover lifestyles.

As of January 2012, the Incontinent Student Bodies spanned five published issues. Issues #1, #2 and #5 were illustrated by Marci McAdam, Issue #3 by Guest Artist Terrie Smith, and Issue #4 by Guest Artist Dormy. All issues were written by Karis, with input from characters featured in the comics. While Issue #1 primarily featured original creations of Karis, subsequent Issues featured significant community involvement in the story development and casting process, which is now a main fixture of the series.

Issue #1 establishes the basic premise of Ashton Hall as a diaper-friendly dorm for students with (or in some cases, without) bathroom troubles, and features several one-off characters. Some characters, such as Josh, Jonathon, Ray the Diaper Dog, and Aaron, have made repeated appearances in subsequent issues or become prominent fixtures of the series. Essentially a collection of very short/pamphlet sized stories, each character received one to two pages of storytelling in total.

Issue #2 introduces several community-owned or created characters into the series, including some of the more prominent Protagonists such as Silas the Draconid, Geovanni the Tiger, Orca the Whale, and Dirk & Daphne the Unicorns. Much in the same fashion as Issue #1, Issue #2 focuses primarily on why each character finds themselves a resident of Ashton Hall, how they coped with the issues that brought them there, and how they reconcile it with their self-identity. Issue #2 spans several more pages than Issue #1, though both Issues were combined into a single graphic novel for republishing several years later by Karis.

Issue #3 is considered the first ISB to have a single, over-arching storyline, and introduces the first Antagonist of the series, Link the Gorilla and his fraternity, O Delta Kappa. This is the first issue to have an artist other than Marci-- the art in this issue is done by furry fan favorite Terrie Smith. Taking place during the University period commonly known as Hell Week, Issue #3 features Issue #2 characters Andrew, Geo, Silas and Orca as the Protagonists, out to protect the Hall and its residents from the humiliation and bullying of the ODK fraternity members while Jonathon and Josh are out at a Psych Symposium. Issue #3 touched upon subjects such as bullying, unnecessary escalation and tolerance of others, as well as acceptance of ones self, at a time when such problems were still viewed as "isolated incidents" by teachers, guardians and the media alike.

Drawn by an artist under the name Dormy, ISB #4 is the second issue to date to feature an artist besides Marci. Issue #4 covers in more depth the relationship problems and adversity the residents of Ashton Hall have faced due to their unique problems or underwear choice, as well as the problems the Protagonists and Antagonist alike face with their immediate family members and parents. Much like Issue #3 before it, Issue #4 touched on controversial topics such as abusive parents, bullying, and female sterility, though largely to a more comedic or platonic-romantic extent with regards to the latter two.

ISB #5 was published in January 2012, and features Marci's artwork for the (presumably) final time in the series. Taking place in Hawaii, Issue #5 follows many of Ashton Hall's regular residents on a prize trip to the Hawaiian Islands. Following a more comedic path than previous issues, the story focusses on the cast interacting with and adapting to a new environment-- Hawaii, as well as dealing with diapers and related paraphernalia in travel. Issue #5 introduces some new characters, including Justin the Lizard and his Mom, which operate the Tour Agency that awarded Ashton Hall with the trip. The residents are also involved in a plot surrounding a Cursed Idol found on the beach, and the string of bad luck it brings to the group.