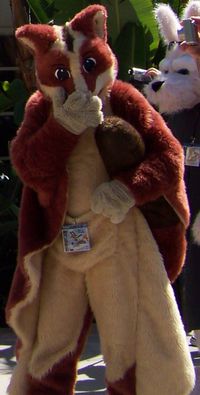 Inaki Zombie (often just Inaki) is a fursuiter who lives in San Jose, California. His fursona is an orange Sugar Glider.

Inaki's fursuit was constructed by Arend Studios, and debuted at Anthrocon 2005.[1]

Inaki is the owner of and technical operations lead for Weasyl. Previously he was the chief administrator of the adult art archive Blue Taboo and in-development social networking site Furspots, and the founder and DJ of internet radio station LT3M.