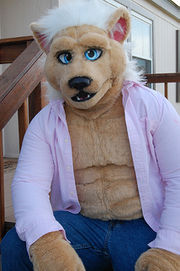 Imperial's fursona is an ashen-tan lion with long ivory hair. His fursuit, depicting this fursona, was constructed by Noble Wolf. Imperial is also a furry writer, using the pseudonym Leo Kendrick.

Imperial was on the staff of Oklacon 2010, as Security Coordinator.