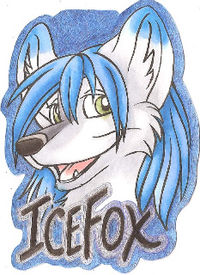 Icefox, as drawn by Mitsu.

Icefox is an Arctic Fox, "mostly white, with a light gray stripe running down his muzzle", with blue hair and blue-tipped ears.[1] He found the fandom in 2003 via Ozy and Millie and has slowly been delving deeper and deeper into the fandom ever since. Not a visual artist, he has been a musical artist for some time, playing the trumpet for 10 years, as well as dabbling with drumming for several years on the side. His musical tastes include mostly rock and electronic music, with progressive and IDM being his favored subgenres of each, respectively.

Although originally from Delaware, he moved to Boston, Massachusetts to attend Boston University and major in chemistry, as well as engage in additional studies in astronomy and physics. He graduated with a B.A. in Chemistry in May 2009 and was looking to seek jobs in chemical physics and materials sciences and engineering.