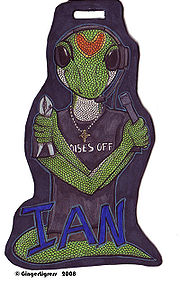 Ian the Gecko, born 1988, is a Christian furry from Aurora, Colorado whose fursona is a day gecko. Ian visited his first furry site, Kurisu's homepage, sometime around 2003 while looking for Maui and Sons fanart. In April 2005 he joined Furrs Fur Christ and became a moderator later that year; in the fall of 2011, Ian was promoted to administrator. Ian attended most years of Rocky Mountain Fur Con and the first two years of DenFur, leading small Christian fellowship services on Sunday mornings.

In April 2022, Ian appeared as a contestant on the NBC game show Weakest Link. He made an impression on the host, Jane Lynch, wearing a kilt and talking about his interest in cosplay. Although he answered all of his questions correctly, this made him a threat in the eyes of his teammates, and he was the 5th person voted off.