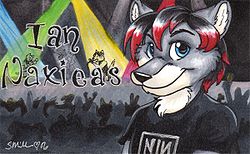 In addition to his wolf fursona, Ian has developed a couple of new characters to represent part of his personality: a rabbit that carries the name, Cameron Nicholas Jensen, as well as a tuxedo cat named Jude Batista.

Ian has an interest in the vore fandom, and used to be active in the Redwall fandom. He is a connoisseur of cosmology, music and video games, and is somewhat active on Second Life and Furcadia. He is also an occasional con-goer.