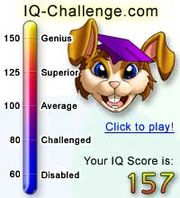 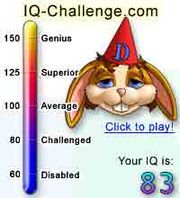 Not so high score

The IQ Challenge was a LiveJournal meme created by Triggur which took the form of an IQ style test in which the player has to answer a number of maths, anagram and logic questions before given their score in a fun image to place on their LiveJournal. What players did not know however, was that the entire test was fake and used the testee's IP address combined with the URL they were told to paste on to the LJ to pull a prank on the poster.

The test's true purpose was shortly discovered by its users, and the quiz was pulled from its own site and replaced with a short essay. This personal piece stated that IQ tests only hinder people (high scores subconsciously promote arrogance while low scores promote inferiority) and that what you do matters more than how smart you are.

The test questions were sourced from genuine 'IQ Test' sources, which gave the hoax a veneer of plausibility. There was no sly tip-off included, as in many other hoaxes and pranks - for all intents and purposes, the test appeared absolutely genuine.

The test results however, were never recorded. When the person who took the test viewed their image, their IP address was identified by the IQ Challenge server and they were shown a high scoring image (from 135 to 165, determined by a random function when starting the test). To anyone else who viewed the same image from a different IP address, it would display a very low score (70 to 92, no correlation to the high score). The result was that many people posted to their LiveJournals, showing off their score and appeared to be cheering for a very low achievement.

The Character displayed on the results images was designed and drawn by Cuprohastes on request. The character has been referred to as:

The official name is, and always has been, "The Dumb Bunny" since the other designs under considerations were Smart Ass for the high scores, or "Prof. Floating Robot Egg-Head". After the hoax was admitted, good quality images were made available by Cuprohastes, which led to the creation of a set of icons by LiveJournal user Screwball 420. The bunny originally had dark blue eyes (International Klein Blue) but after negative comments, they were subsequently altered to a lighter colour. Originally the bunny was supposed to be female, but was drawn to be more androgynous to appeal to a broader range of users. 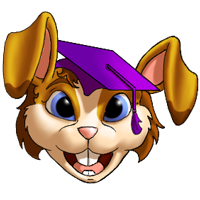 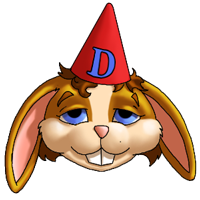