iMew is a comedy webcomic drawn and written by Nekonny and co-written by Curran. Previously hosted by The Katbox, it is now part of the Kemono Café webcomic community.[1] 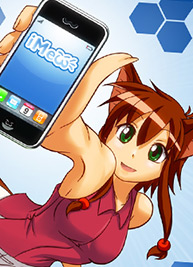 Lydia meets up with Sammy after college and arrange plans for the night. Before heading out with Lydia, Sammy goes into her apartment building to grab the mail. Excited that her new smart phone is finally here, Sammy contacts Lydia to brag about it and to make plans for the evening. After ending the call on news that Raf would be there too, Sammy tinkers with her phone, tabbing the screen with great pressure. Sammy’s frustration turns to shock as she hears and understands Eddie.

Upon realizing that she has ears, Sammy hears Raf knocking on the door. Terrified of her new appendages, Sammy grabs a cowboy hat and opens the door for Raf, who brought pizza. Raf tries his best to help Sammy with the new phone but is having difficulties as he can’t read the Chinese manual that came with the phone and is more familiar with camera technology. Lydia comes barging in and questions Sammy’s new hat. Unable to make any progress, Raf starts to randomly press buttons, resulting in Sammy growing a cat tail.

Knowing that something is up, Lydia quickly shoves Raf out of Sammy’s apartment and continues to pry at Sammy about her being all nervous until Sammy reveals her new cat appendages. Initially shocked with this revelation, Lydia is in utter disbelief that a mere phone could transform Sammy into a cat. Lydia tries her best to help Sammy; however, due to her inability to read Chinese, Lydia inadvertently causes Sammy’s chest to expand. Lydia manages to reduce Sammy’s chest size almost back to her “supposed” original size. Eddie does call Sammy out that they are still two sizes too big. Lydia calms Sammy down as she starts to become hysterical of being transformed into a cat, stating that they can fix this through trial and error. Before they could charge the phone, Eddie damages the charger cable. Unable to order a new charger online due to the site being down, Lydia and Sammy head into the city after Sammy changes out of her Western style.

Heading to the mall, Lydia and Sammy start searching for phone and electronic stores in the hopes that someone would know how to fix the charger. Sammy is occasionally distracted with sales during the search. Sammy bumps into Lori, a rival college student majoring in law, and Curran, her pet ferret. After a quick squabble between Lori and Sammy regarding Curran’s advances and her knock off phone, Sammy leaves with Lydia to Chinatown. Lydia figures that someone in Chinatown would have a better time reading the screens; however, Lydia isn’t familiar with the culture and Sammy has only ever ordered authentic Chinese food.

While on the bus to Chinatown, Sammy inadvertently answers a phone call from Raf and transform her human nose to cat nose. Both Lydia and Sammy panic at the site of her face and start looking around for something to cover up her face; however, their attitudes change whenever two women comment on her cat costume. Upon stepping off of the bus, Lydia and Sammy realize that there’s a Year of the Cat Festival going on in Chinatown. With the need to hide her cat appendages gone, Sammy rips off her hat and belt to reveal her “cat costume.” Sammy takes advantage of this new found freedom and digs in on all the food while Lydia finally finds a store that can assist them with the phone.

At the store, a store clerk appears and offers to help Sammy and Lydia. Unfortunately, the store clerk speaks very little English and causes Sammy to further transform into a cat with whiskers, claws, and fur on her skin. The store clerk realizes that the phone needs a new card for it to transform Sammy back to normal and tells them to come back later. Lydia wants to go to another store and see if someone else could help them, but Sammy runs off in the hopes of having fun. Lydia reluctantly agrees with Sammy to have some fun right as an announcement goes off for a cat costume contest. Sammy enters and doesn’t see any competition until Lori makes an appearance. While Lydia enjoys the potential cat fight brewing, Curran swipes Sammy’s phone from her purse that Lydia dropped in the excitement. Sadly, neither Sammy nor Lori won the contest as they spent the entire time glaring at the other. After the contest, Sammy discovers that her phone is gone. While frantically looking for her phone, Sammy looks up to see Curran biting it. Sammy chases after Lori and Curran only to come up short of reaching them before the bus doors close.

While Lydia tries to contact Sammy’s phone, Lori discovers the phone and tries her best to find out who it belongs to so that she can return it. Unfortunately, Lori messes around with the phone’s settings in hopes of finding a language mode and inadvertently transforms Sammy into a full blown cat. Finally reaching Lori, Lydia explains to Lori that she has Sammy’s phone and would be willing to pick it up later that day instead of waiting until Monday as Lori proposed. Lydia takes Sammy back to her apartment to ask Raf for directions to Lori’s house.

Back at Sammy’s apartment, Lydia asks Raf for Lori address and dodges questions regarding the new cat. Waiting for Lydia and Raf to finish up with the directions, Eddie starts to encourage Sammy to embrace her new cat self, egging her on with tuna fish. Once Lydia receives the instructions, she heads out with Sammy and notices that Sammy is now meowing instead of talking in English.

At Lori’s house, Lydia convinces Sammy to hang back so that she can deal with Lori directly. Sadly, Sammy spots Curran biting the phone and goes after him. Employing her cat like abilities, Sammy easily climbs up a tree and leaps into Lori’s room. Sammy faces off a rather aggressive Curran and slashes his tie. At that precise moment, Lori comes in to see Curran in disarray over his mangled fur and cut tie and Sammy destroying her legal thesis. Outrage, Lori throws the phone at Lydia and starts to chase them, threatening to turn Sammy into a new cat scarf. Lori goes so far as to chase Lydia and Sammy on her motorcycle. Lydia tells Sammy to head in the opposite direction once they get off the bus to lure Lori and Curran away while she goes to the shop and get the new card and charger. Just as Lori and Curran corner Sammy and reach to grab her, the store clerk manages to insert the card and restore the phone to its factory reset. Sammy returns to her human state, stopping Lori in her tracks. Hearing Sammy scream at the top of her lungs, Lydia runs out to see Lori and Curran walking out of the alley in utter disbelief and Sammy hiding her nudity behind a cardboard box. Lydia heads to the Year of the Cat Festival to find Sammy something to wear and returns with a cat hoody.

With everything now fully resolved, Sammy is now able to better use the phone now that everything is in English. Sammy and Lydia agree to keep the whole cat incident to themselves. Lydia continues to try and hook Sammy up with Raf despite him constantly looking at her weird after that day. Lori continues to try and one up Sammy; however, Sammy increases her bust size to counter Lori’s moves and win Curran’s affections. Sammy does continue to experience some hiccups with the phone that result in some cat appendages to show up here and there. 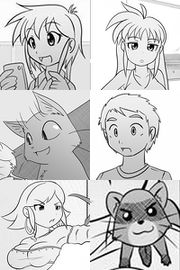 Sammy, short for Samantha, is the primary protagonist in iMew. After receiving her new phone in the mail, Sammy ends up inadvertently transforming herself while trying to figure out how to use the phone despite not being able to read Chinese. Although serious in her efforts to turn back into a human, Sammy tends to wonder off in favor of sales or food. Through her confrontations with Lori, the readers learn that Sammy is a legal major. Sammy calls Curran a rat instead of a ferret.

Lydia is Sammy’s best friend. Lydia tends to be the more serious of the two, often helping Sammy get out of trouble. Lydia has been known to hook Raf up with various women, specifically Lori and Sammy. Lydia is an avid painter.

Eddie is Sammy’s pet cat that first reveals Sammy’s cat transformation. Eddie causes the time concern over Sammy’s transformation after biting the charger cord. Eddie playfully teases Sammy about being stuck as a cat, taunting her with tuna fish. Eddie constantly complains about Sammy being a cheap when it comes to his food.

Raf is a male acquaintance to Sammy, Lydia, and Lori. Raf initially brings pizza over to Sammy’s house for a party but is left to house sit for Sammy while she deals with her transformation. Lydia often tries to hook Raf up with Lori and then Sammy. Raf is knowledgeable when it comes to cameras. Raf once assisted Lori with her homework.

Lori is Sammy’s arch rival and a legal major in college. Lori believes herself to be more fashionable and modern than Sammy when it comes to her attire and gadgets. Lori is neutral when it comes to Lydia. When pushed too far, Lorie goes berserk. Lori owns Curran, her pet ferret.