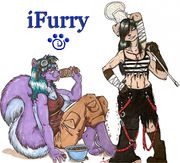 The fursonas of the two iFurry hosts.

iFurry, also known as iFurryTV, was a short lived furry webshow that aired approximately once per month on YouTube from July 19th, 2009 to September 7th, 2010. It was co-hosted by Risu Murasaki and Potato Zombie.

iFurry is a show about being furry, having fun and entertaining the masses. Each episode, running approximately 5 minutes, has a loose theme that ties it together as well as many random moments.

The two female, furry co-hosts resided near Cambridge, Ontario, Canada during the production of the series. They would upload episodes onto YouTube on a daily basis during the course of 2009 and 2010. On September 7th, 2010 Risu Murasaki announced that production of the show would be temporarily put on hiatus as she was moving to Saskatchewan for job and family related reasons. Despite this, no new episodes have been produced since then.