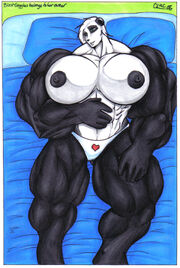 Hypertrophilia, also known as hypersexuality, as a furry paraphilia term, is a furspeech word used to describe some (especially macrophilic) people's attraction -- emotionally and/or sexually -- to hyper-endowed characters, or characters represented in any medium with over-exaggerated (i.e. impractically-large) erogenous zones or sexual characteristics.