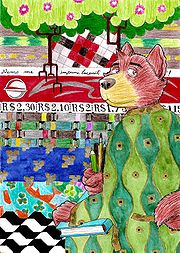 Hwei Chow by himself

Hwei Chow (previously known as Spy Dog AA and Supai Inu AA) is a Brazilian furry artist whose fursona is a short hair Chow Chow dog. He was born in São Paulo, Brazil, on October 31st, 1978.

Hwei Chow joined the furry fandom in late 2000 after to stumbling upon mentions of furry while searching for Spy Dogs. His art is influenced by Renascentism and has many hidden messages.

In 2001, still under the alias of Supai Inu, Hwei adopted the alias Yin & Yang for thematic iconic art, more geometric and/or more adult. This style was later incorporated to his main alias, then Hwei Chow.

Hwei has made several contributions to the fandom. He was the creator of the rules system used in Brazilian furry forums, founder of Furzine forums, and administrator of Felin forums. He is also the producer of The Tame Talk Show in Felin. Was the interviewer of the Focinho a Focinho and of its English version, Muzzle to Muzzle (text based interviews), a Brazilian interview podcast in the Furry Brasil portal, where he actually is ombudsman. Creator and puppeteer of Piradinho in its show "TV Piradinho".