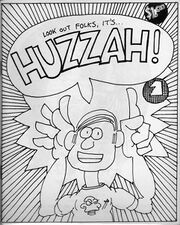 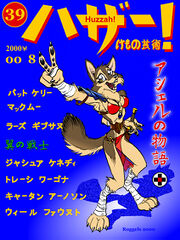 HUZZAH! was a self-described anthro APA-Zine.

HUZZAH! first started as a self-published, one-shot art fanzine created by artist Steve Gallacci in June 1979, while serving on the United States Air Force. The title was revived in 1988 as a fanzine for his Albedo Anthropomorphics series, publishing several issues under the Thoughts & Images label.Along himself, it was produced by a Jeff Kilian, Kevin Carroll, Jon Warner, and Ben Burgraff.[1]

In 1990 Thoughts & Images ceased production and the fanzine with it, returning in February of 1991 under the helm of Dwight Dutton[2] as a full-size quarterly APA, remaining in print continuously for over 11 years.

Produced in Valencia, California, USA, right next to Cal Arts, the publication came out four times a year, in February, May, August, and November, and issues were sold by subscription, in small numbers at conventions, and/or sold online via furry-friendly publishers like Rabbit Valley Productions and Second Ed Mailorder.

Beginning with #5, HUZZAH! switched to a furry art fanzine format. Co-editor and artist Roz Gibson explained the change as such:

This format change was influenced by a number of Rowrbrazzle artists who had become dissatisfied with the publication's declining quality and the proliferation of text-based and x-rated material in it.

After the change, HUZZAH! no longer allowed any text-only contributions and tried to limit the membership to professional artists, art students, or high-level hobby cartoonists.[citation needed] It was one of the first furry fanzines to feature a color cover on every issue.

HUZZAH! ceased publication with issue #50 on August 2003,[4] due to financial reasons.[5] The cost of printing and shipping became much greater than the amount of money that was brought in from sales and subscriptions, and the editors could no longer make up the difference out of their own funds.